When a woman was suffering from depression and anxiety, she realized that visiting animal shelters was one of the only things that made her feel positive.

One day, she went to a shelter near her home and asked to see some of the cats. She noticed a group of cats that were separate from the others. When she asked about their story, they were described to her as ‘feral.’

She was told that meet and greets weren’t encouraged with these cats, but the lady persisted. She was introduced to Tuna.

Tuna was due to be euthanized that very week if she didn’t find a home. As soon as her new human heard this, she decided that she had to take Tuna with her. So, she called her roommates and told them she was bringing a cat home.

Their bond was instant, and the pair quickly became inseparable. But Tuna didn’t meow or show many signs of emotion. While she seemed happy in general, her human thought there was something missing.

That’s when she got the idea to take Tuna outside.

Within minutes of walking outside of the apartment, Tuna came out of her shell. She was delighted to be back out in the fresh air, even if she was on a leash.

When her human realized that all Tuna needed was fresh air, they began going everywhere together. They started slowly by going on short hikes, and they eventually started visiting new places.

And Tuna even helps her mum with anxiety. She realizes that her human gets nervous and upset, and she’s happy to sit there and give her all the love and attention that she needs.

It seems that Tuna is returning the favor. After her human saved her life, she now realizes that it’s her turn to give something back. 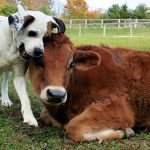 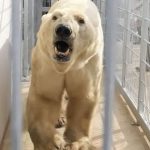