When Nat woke up one morning, she was convinced she could hear an animal in distress in her backyard. She called her husband to help her, and they noticed a fluffy puppy sitting on their back step.

After chasing the puppy around the garden for a while, Nat’s husband was able to catch her, and they brought her inside.

They noticed that the pup was dirty and extremely tired, so they decided to give her a bath to help make her feel better.

And as soon as she realized she was safe with Nat and her husband, she became incredibly playful, and began acting just like any other puppy!

They decided to name the puppy ‘Bear’ and Nat knew exactly where she would find a loving, forever home.

2019 was a tough year for Nat’s family, as her mother-in-law sadly passed away, and then her father-in-law had to put down the beloved family dog. Understandably, her widowed father-in-law was having a tough time of things, and that’s how Nat had the idea of surprising him with Bear.

Terry was absolutely thrilled to have Bear in his life, and the two developed a close bond. Terry felt that bear really helped him through some dark and tough times, and was just so grateful to have the unconditional love of the pup.

But there was a small catch.

Terry didn’t initially know what breed Bear was, and when it was revealed that she was a St Bernard, he couldn’t believe how big she would eventually become!

Bear soon developed into a gentle giant, and has transformed Terry’s life for the better. This story just goes to show how dogs can help humans through the toughest times in life, and we’re so grateful for their love and continued support. 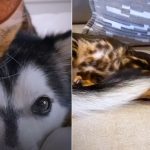 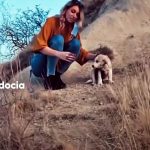