Described as a ‘shark rescuer,’ that’s a very appropriate title for her line of work. But she provides sharks with one service in particular that is quite staggering.

She removes fishing hooks from their mouths.

Often, Cristina actually puts her arm into the mouth of a shark, before prising the hook out of their jaws. What might seem like the ultimate nightmare situation to some people, Cristina takes great pride and joy in her work.

As an experienced shark diver, Cristina has got to know certain sharks and has even named them. This is how her hook rescuing idea first came about.

When she had removed the hook from the mouth of a shark who was familiar to her, something incredible happened. Other sharks began swimming up to her, looking for her help.

She estimates that she has removed hooks from the mouths of approximately 300 sharks in her 26 years of diving with them. While many of the sharks she’s helped are known to her, others have just appeared in her midst, and approached her for help.

It’s clear to Cristina that sharks communicate with one another in a way that humans can’t comprehend, and this results in the magnificent encounters that she’s able to experience today.

On her bond with these wonderful creatures, Cristina remarks:

“Sharks in general, in the world are very tolerant of our presence, entering their world […] What I’ve developed is an appreciation of their vulnerability.”

She also reminds us that sharks are absolutely integral to the maintenance of the healthy ecosystems within the oceans. They have been severely threatened by humans, who have contributed to the ever-dwindling population of wild sharks in the vast oceans.

Few animals in the world are as misunderstood as sharks. Perhaps because of the Hollywood movie Jaws, and the occasional shark attack, that is almost always nearly an accident, our perception of sharks has been completely distorted by misinformation.

People like Cristina play a hugely important role in educating people about the reality of sharks, and hopefully more and more people will consider these beautiful creatures with the empathy that they deserve.

You can keep up with Cristina’s work by following her on Instagram.

Let me leave you with Cristina’s poignant reminder:

“There are no monsters in the sea, only the ones we make up in our heads.” 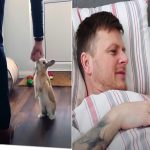 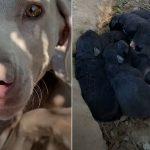