When Bruce and his wife were on holiday in Macedonia, they noticed a stray puppy outside the only restaurant in town. He was hobbling badly and in pain and seemed to have no direction in life.

When they left the restaurant at midnight, they encouraged the little puppy to follow them home. He arrived at the front door in a terrible state – his ribs were showing through his fur and he couldn’t walk properly.

Bruce recalls the moment he knew he had to make a decision about the puppy’s future:

“I believe in fate. The fact that he followed us into a yard, I just knew he had to be part of our life.”

Not wanting to scare him or make him feel uncomfortable, they decided to leave the puppy outside for the first night, as they knew that the backyard was well fenced and he would be safe in the garden.

Bruce’s girlfriend, Jen, headed out into the garden first thing in the morning to look for the little puppy. After seeing her open the door, he hobbled up to greet them, and the couple decided to let him into their home.

They set up a makeshift bed for him on the couch and fed him food and water. Later that morning, they called out a vet who was quick to come and treat the little puppy. Within one hour, the vet had administered care, give the pup his vaccines, and even arranged a doggy passport so the pup could return to Canada with Bruce and Jen.

They decided to call him Chachi. But after getting all excited and ready to fly him home, the vet got in touch and told Bruce that Chachi was too sick to fly. As luck would have it, Jen’s parents were on vacation with them, and they said that they would hang on for a few more days until Chachi was ready to fly.

Incredibly, Chachi made it to Canada and was ready to begin his new life with Bruce, Jen, and their other dog. As you can see from the incredible video that Bruce put together, he’s developed into the most handsome, fun-loving dog they could possibly imagine.

In spite of the extra cost and difficulty in bringing Chachi back to Canada with them, Bruce and Jen wouldn’t change what they did for the world.

Thanks for having such a huge heart guys! 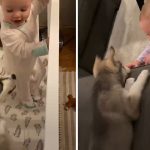 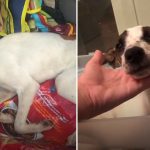