When Mindy and Danica were driving past a canal in Fresno, California, they thought they saw something out of the corner of their eye.

They decided to pull over and realized that sitting perfectly still in the shallow water of the canal was a Pitbull.

Both women wanted to initiate a rescue, but they weren’t sure exactly how to go about it at first. Working with a couple of guys who immediately offered their assistance, they set about retrieving the Pitbull from the water.

The guys removed their belts and attached them to some rope, which they used as an opportunity to reach down to the stranded dog. One of the men slid down the banking with the rope in his hand, ready to place it around the neck of the dog.

This whole time she hadn’t moved, it was as if she knew she was about to be rescued and she wasn’t about to jeopardize it by running away.

As soon as one of the guys had the tie around the dog’s neck, she was only too happy to be pulled up to the safety of the bank. Mindy and Danica then took the Pittie home with them as they decided what to do next.

They quickly learned that the dog wasn’t microchipped, and nobody came forward to claim ownership over her when Mandy posted online.

Mandy called the Pittie Bella, and she did everything she could to find her a loving home. But it wasn’t easy. As much as she loves people, she doesn’t get along so well with other dogs and cats, which restricted her choices somewhat.

But thankfully, Suzanne came along and was only too delighted to give Bella the forever home that she so deserved.

She’s now a chubby little princess, and enjoys a life of luxury with her new family.

To find out more about Mindy and Danica’s animal rescue efforts, you can check out the Facebook page of Venus Animal Haven. 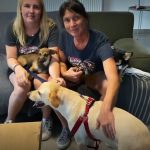 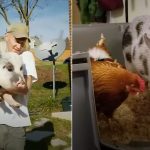