Ocean Ramsey believes she was seven when she first swam with a shark. Living on Hawaii, the water was a huge part of her life from an early age, and she quickly developed an affinity with the ocean.

She became fascinated by sharks. She was amazed by their behavior, and grew frustrated with how misunderstood they are.

In this incredible footage, you can watch Ocean swim alongside an enormous Great White shark, and comment on just how beautiful the creature is.

The Great White is just one of thirty species of shark that Ocean has studied in more than a decade as a marine biologist. She can hold her breath for more than six minutes, and chooses to free dive wherever possible, as she notes that the bubbles from her scuba gear often put the sharks off.

She introduces us to a couple of damning statistics:

90 % of the world’s shark population has disappeared in just thirty years.
70 – 100 million sharks are being killed every single year.

Ocean believes that sharks are the most misunderstood animals on the planet, and it’s fear that drives people to kill and devalue the lives of sharks. Unless we do something about it and work hard to preserve the populations of sharks, we could see them die out in our life time.

To keep up with Ocean’s incredible journey as a marine biologist, you can follow her on Instagram 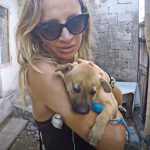 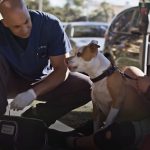