In the immediate aftermath of the devastating Hurricane Dorian that swept across the Bahamas, Douglas thought of an ingenious way to look for animals that may still be alive in the wreckage.

He flew a drone above a huge pile of wreckage and noticed some movement. After studying the footage, he realized that there was a dog wandering around in the debris.

Using the GPS feature of the drone, he was able to pinpoint the exact location of the dog and move in to perform a rescue mission. Thankfully, Douglass was able to take food and water to the dog, and he took him out of the wreckage the following day.

Douglas’ passion for saving animals stems from his love of the natural world. He worked as a wildlife cinematographer, and used to fly a Cessna plane over ancient forests in order to document the mass scale of illegal logging that was occurring.

As technology has advanced, Douglas has realized that he can have a similar impact by piloting a small drone over areas of interest, and it’s how he came to think of his idea of rescuing animals affected by natural disasters.

When he flew to the Bahamas, he was initially going to deliver aid and film the destruction to raise awareness, but when he noticed dogs running around in the wreckage left behind by the hurricane, his trip took on a whole new purpose.

He attached an infrared camera to his drone which helped him to locate the dogs quickly, and it proved to be a remarkably effective way of rescuing the dogs that had been so devastatingly left behind after the hurricane’s destruction.

When Douglas saw the terrifying impact that wildfires were having on communities in Australia, he decided to fly out there and put his drone to further good use.

Soon after arriving in Australia, Douglass used his drone to rescue dozens of koalas that were clinging to trees in sparsely populated areas of forest. They would have had absolutely no chance of survival if it wasn’t for Douglas’ intervention, and his efforts to fly across the world were certainly rewarded.

Following his experience in Australia, Douglas flew out to Louisiana in the aftermath of Hurricane Laura, and utilized the drone to rescue cats that had become the latest victims of mother nature.

Incredibly, Douglas helps to reunite pets with their rightful owners. But in the case of Duke, the dog who he helped to rescue in the Bahamas, he was never claimed. So Douglas was only too delighted to take him home to Oakland and care for the dog himself.

Douglas’ selfless rescue efforts are proof of the amazing outcomes that can be achieved when humans put technology to good use and utilize it to save the lives of helpless animals. 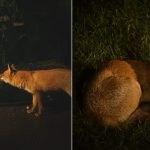 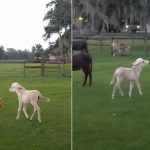