Mike’s relationship with his kitten Gracie is undoubtedly unique.

While most cats don’t like the water, Gracie actually joins Mike for a swim, without being prompted!

It’s not just a paddle, either. They get out to a reasonable depth before returning to the shore, which is all the more remarkable when you consider just how tiny Gracie is. She’s a strong swimmer for sure and just loves the water.

When they return to the beach, Mike has a towel set up that Gracie heads straight towards. He also has some clean, fresh water that he uses to bathe her, to remove the salty water from her fur.

After her bath, Mike rubs Gracie down with towels and the kitten is back to being super fresh and clean! It’s the cutest thing.

Mike lives on the beautiful U.S. Virgin Island of St. John. Because he’s been helping out on his uncle’s house, he’s been living in a trailer on the island. When he was working on the house, he found Gracie hidden in one of the walls, and knew immediately that he needed to give her a home.

He believes that it was perfect timing, as both of them needed a companion at that stage of their lives. And the reason that Mike started taking Gracie to the beach, was because he felt bad about keeping her inside the whole time, as there isn’t much space in his trailer.

But it’s not just the water that Gracie loves. She enjoys climbing in the trees and following her human around, wherever he goes. As Mike loves the outdoors, he’s always taking Gracie to new places, which helps to strengthen their trust and bond. 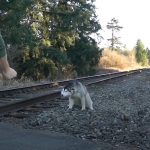 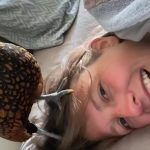