When you live near the woods, the strangest things can appear in your back yard. When Evan was sitting and relaxing in the sunshine last year, he noticed a racoon emerge out of the trees.

He didn’t know a great deal about racoons, but thought, like many other people, that they were rather pesky and caused all sorts of havoc.

What he wasn’t expecting was this racoon to be one of the friendliest animals he had ever met. She came right up to him and took some food out of his hand, and was keen to see what else he had to offer.

Without initially realising that she was a girl, Evan decided to call her Larry, and looked forward to her daily visits to his garden. One day, she brought along her baby to say hi to their new human companion.

So, with the help of his former astronaut dad Chris, Evan decided to build Larry and her baby a shelter in his back yard, which offered her protection from coyotes and the weather.

Soon after building the racoon house, Evan saw Larry dangling from a tree one day, clearly too hot to move any great distance!

To help her cool down, he filled up a kiddies pool with water and placed some food on a bench in the centre. Within minutes Larry arrived and cooled off with her baby in the water.

As the winter months approached, Evan noticed that Larry stopped coming every day, and soon enough stopped coming altogether. He assumes the racoon is hibernating, but was certainly sad to see her go.

Evan is incredibly grateful that he had the chance to develop such a close bond with a wild animal, and he’s already looking forward to seeing his friend sometime soon. 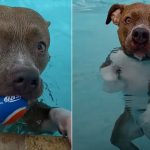 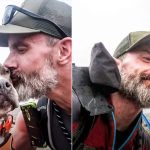