Billie was once a street dog who had to fend for herself and survive in the harshest of conditions. When her foster parent Aria found her, she was literally lying in the trash, simply waiting for death to arrive.

She was so limp and desperate that all Aria could do was scoop the dog up and hold her gently in her arms. Because she was a street dog and was in such a bad condition, everything was new and frightening to Billie, and she couldn’t find the energy to get up of his own accord.

When Aria and her friend Grace gave Billie her first bath, she was so weak that she couldn’t even hold her head above the water. On the first night, they had to syringe feed Billie some water to keep her hydrated, and they weren’t sure if the poor dog was going to survive the night, given her condition.

When they were able to take Billie to the clinic in the morning, they thought she must have tick disease that had progressed so far, that it had put her into a state of paralysis. After putting Billie on some medication to treat her condition, Aria began nursing her back to health. She recalls feeding her during those first days:

“She ate but I was holding her head in the bowl and helping her.”

One of the most significant parts of Billie’s rehabilitation was the fact that Aria introduced her to her other dogs, who began interacting with the stricken pup and showing her affection. As her confidence grew and the medication helped her gain strength, it got to the stage where Aria could hold her tummy and Billie could move ever so slightly forwards and backwards.

It was incredible how much progress Billie was making, and by the tenth day, she was able to stand at her food bowl and feed herself. Aria recalls:

“Every day, she kept making more and more progress. It was like watching a new-born learn how to walk.”

And then came the moment came that Aria and Grace had been waiting for. They witnessed Billie take her first steps unassisted since they had brought her into their care, and they simply couldn’t have been happier.

Billie’s recovery continued at a great pace in the initial care of the selfless Aria and Grace, but they really wanted Billie to find her forever home and have the chance to be loved like every dog deserves to be.

And that’s exactly what happened! Billie was adopted by the most caring couple, who dote upon Billie’s every need and treat her like the princess she deserves to be.

This beautiful story goes to show that every dog deserves the chance to live a healthy life, and is evidence that there are super heroes in this world who will do everything they can to save the lives of poor, desperate animals like Billie. 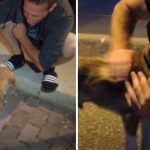 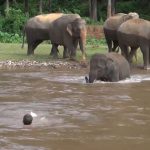