When Brittany was trying to rehabilitate a new dog that had arrived at the Santa Fe Animal Shelter, she didn’t realize quite how difficult things would be.

The dog had never been on a leash and was absolutely terrified of everything. He would cower and hide in the corner, and anytime the door would open or a human would approach him, he would lie down and not want to move.

Brittany managed to get him on a leash and slowly encouraged him to move outside. Although things were incredibly slow at first, he learned to move on a leash, which was encouraging given the constant nervous state he was in when he was inside.

Brittany realized that if the dog was going to have any chance in life, she would need to find a foster home. And that’s exactly what happened.

His new humans named him Tobi and adopted him right away. He became best of friends with the family’s other dog, Ciara, and he now enjoys every second of his life!

Whether he’s playing with Ciara or chasing his human on the bike trail, he’s simply unrecognizable from the dog that arrived at Santa Fe Animal Shelter in the not so distant past.

It just goes to show that you should never judge a book by its cover, and that every dog deserves a loving home and a second chance!

To find out more about the incredible work of the Santa Fe Animal Shelter, or to contribute to their life-saving efforts, visit their website. 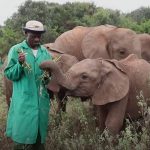 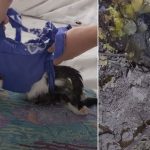