When Jovi was taken in by Animal Care Centres in New York, he was desperately sad. Although cats can’t cry, it was obvious to his rescuers that Jovi was exhibiting signs that he was super depressed.

He would curl up right at the back of his crate, facing the wall. He was so terrified and sad that he wouldn’t even show his face.

One of the staff from the shelter decided she wanted to be responsible for nursing Jovi back to health, so she took him home to her apartment. True to form, Jovi hid in his crate and showed no interest in coming out to explore his new home.

His foster mum slowly prised away the towel that Jovi was wrapped in and was able to welcome the cat into her arms. He immediately buried his head into her arm pits and sat their motionless. It was clear that this foster story would require some time and patience, and fortunately for Jovi, his rescuer had nothing but love to give.

Lynne allowed Jovi time to adapt to his new surroundings by leaving him in her office space, and she would check on him regularly. When she came and sat on the floor next to him, he would curl up on his rescuer’s legs and sleep for hours.

Although Lynne started leaving the door open for Jovi to explore, he wasn’t interested in heading out into the house at first. But after a few days, he worked up the courage and was interested to see what he might see outside of his safe space.

This was when Jovi first met Toshi, Lynne’s other cat who has been living with her long term. Lynne was initially worried about introducing the two cats, but she did it slowly and allowed Jovi to gain some confidence before allowing Toshi into his safe space.

The two cats bonded almost right away, and Toshi had nothing but love for his foster brother, although he had shown aggression to other cats in the past. Perhaps he realized that Jovi was a sensitive soul and this motivated him to be extra nice.

It wasn’t long before Lynne found a forever home for Jovi and she was really sad to say goodbye to the cat who she had helped come through so much. 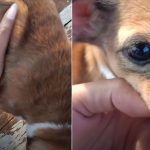 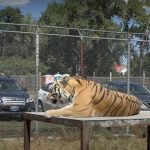