Crows are known to be unforgiving towards other, smaller birds that share the skies with them. As Kara was walking her dog, she saw the devilish nature of a crow in action.

A tiny baby robin seemingly fell from the clutches of a crow right in front of her, and she immediately acted to try and save the robin’s life.

She carried him home and put him in a box, before feeding him and giving him a safe place to stay. It was touch and go at first because the robin was injured, but Kara wasn’t about to give up on him easily.

Kara took the tiny bird out into her back yard every day so he could hop around and develop his confidence again, but his wings didn’t seem to work properly. It was clear to Kara that they had been damaged by the crow and it would take some time until he got full use of them once again.

Although it was slow going, Kara noticed the bird developing strength in his legs and wings, and she was thrilled with the progress he was making.

Kara digs the soil in her garden to look for worms for the bird, and he’s never far behind her! In fact, he often jumps on her foot in excitement, and as soon as the soil is turned over, he hops in the mud and searches for himself.

It wasn’t long before Kara noticed the robin feed for himself, and she was confident that he would soon be able to fly and return to his natural habitat. Around a week into their relationship, the bird started to take little flights around the garden, much to Kara’s delight.

He then started flying even higher, and Kara was confident that he was close to returning to the wild. And as he developed even more strength, Kara was happy to leave him to sleep outside in the tree in her yard.

And even after several months, the robin didn’t forget about his human rescuer. He regularly drops in to say hello to Kara and is a frequent visitor to her garden. 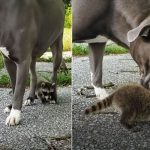 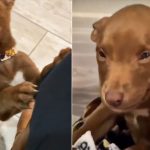