Rosie is a cat with an unusual role in her household. As well as being an adored rescue pet of sisters Thi, Thoa, and Tram, she’s also the leader of a pack of huskies.

While cats and dogs tend to get on much better than the world of film and TV would suggest (think Tom and Jerry, for instance!) it’s still unusual to see a cat with such a huge influence on the life and behavior of three enormous huskies!

When the sisters rescued Rosie as a puppy, she was frail and refusing milk. They didn’t think she was going to make it.

But they had the idea of pairing Rosie with Lilo, one of their huskies, who had shown a lot of affection to previous foster cats they had welcomed into their home. And it worked.

Within a few days, Rosie had transformed into a healthy and outgoing kitten, and it was all thanks to the relationship she had developed with Lilo.

As she grew stronger and more independent, it was never the sister’s intention to keep Rosie, as they always found forever homes for their foster kittens. But due to the bond she developed with Lilo and the other dogs, it was clear to them that she needed to stay.

With Rosie now a healthy and friendly cat, the sisters noticed an incredible bond forming between her and the huskies. They started heading outside for adventures together, and proved inseparable as they started seeing the world in each other’s company.

And the more time that Rosie spends with her huskies, the more she acts just like them. Whatever the huskies are doing, Rosie is determined to be involved, and they’re just the cutest pack when they’re out and about exploring the world! 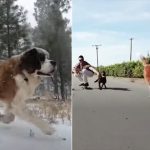 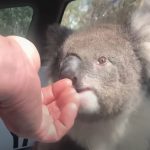