As a couple were hiking through the mountains in Cappadocia, they spotted a puppy all alone, covered in a mysterious blue paint.

Wes and her boyfriend realized that the puppy was probably part of a family of dogs that was nearby, but it seemed as if the mother was prioritizing the health of her other pups, as this one was unable to walk more than a couple of steps.

That’s when they decided to take the pup back to their hotel for a bath, and to see if they could get some treatment in the nearest town.

Wrapped up in a travel towel, the pup joined the couple in the car. Because of the mysterious paint that he was covered in, the couple decided to call the pup blue.

After a warm bath and being wrapped in bandages, Blue relaxed somewhat in the couple’s room, and he was relieved to have received lots of love and care from his rescuers.

But in the middle of the night, Blue woke up and was in a lot of pain. That’s when Wes decided to take the pup to a 24-hour vet to see if they could get him some immediate attention.

The vet thought that Blue probably fell from one of the hills, and the blue paint was probably antiseptic that a farmer had sprayed on him to try and treat his wound. But the vet did say that if the couple hadn’t picked him up, he almost certainly would have died.

Blue was kept in the vet’s surgery for ten days as he underwent a range of tests and a full course of treatment. They went to pick him up and started falling in love with Blue as his personality shone through.

Because they’re full time travelers, they knew they couldn’t keep Blue, so Wes set about finding the perfect family for the pup, and quickly found a couple who were delighted to take Blue in.

After a flight to Colorado, Blue was finally safe in his forever home, and started his new life with his family. 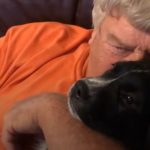