When Erin went out into her garden, she noticed that a stray cat had started coming up to her back door. She was curious to see how long the friendly feline would stay around for, and she was thrilled to see her several days in a row.

She decided to leave some food out for her and the cat was only too happy to enjoy it! After eating, she would then luxuriate on Erin’s patio and just lay around, wanting to be stroked.

Erin wasn’t sure about letting her in at first, because of her dog, Murphy. Although Murphy was generally friendly to cats, Erin wasn’t sure how he would react to a cat entering his territory.

She needn’t have worried.

Murphy was happy to welcome the cat inside, and it quickly became clear that the two of them would become friends.

Erin named the cat Kevin, as she initially thought he was male! But after taking her to the vet to see if she was microchipped, they learned that not only was she female, but she was heavily pregnant!

Much to Erin’s surprise, the female Kevin was due to give birth any moment, so she made her comfortable and waited for the litter to arrive.

Kevin gave birth to four adorable healthy kittens. Erin allowed Kevin and the kittens their own space for a few days before letting Murphy the dog in to introduce himself.

Erin was able to find loving homes for each of Kevin’s kittens, but she decided to keep the mother in her home. She felt it was the least she could do for Murphy, who just loved having the cats around.

They now live happily together and are so grateful that Kevin chose to come into their life at a time she needed some love and affection.

To keep up to date with Erin and see some of Kevin’s adventures, you can follow her on Instagram. 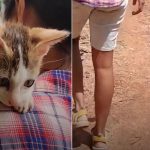 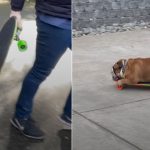