Greyhounds are amongst the softest, calmest dogs you could ever wish to interact with. While not all of them are used as racers, those that are often develop nervous tendencies and struggle to interact with humans after they retire.

When Salem was rescued and brought home by her human, it took her a while to come out of her shell. In fact, in the early days, she wouldn’t eat, and would just lie in her cage, watching the world go by.

Salem had run 159 races in her life, and didn’t know anything different. She was so unfamiliar with her new surroundings, that she didn’t understand how to interact with her human and what to do for food. She also had severe separation anxiety, and followed her human around everywhere.

To socialize Salem, she was taken to the store, to various restaurants, and was shown that there was a new life for her away from the track. Salem also quickly fell in love with the beach, and started swimming in the crystal-clear Florida waters. After all, who wouldn’t love that?!

But Salem was only fostered by Caleb, so he worked hard to find her a forever home. It just so happened that at the time, someone who had rehomed a separate dog for Caleb got in touch and said he was looking for another.

As such, Salem found her forever home pretty quickly, and she now lives happily ever after with a loving family in Florida.

This touching story shows us that there’s undoubtedly life after the track for racing dogs, and now that many are closing down, it’s important that us humans give them the forever home that they truly deserve. 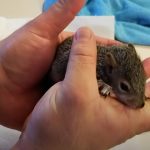 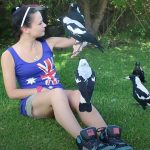