Cats are perhaps not as cuddly and friendly as their canine counterparts, but nobody told Lippy that! Every morning, she jumps up on Harry’s lap and gives him the most affection, heart-warming cuddles you can imagine.

Harry lives on a farm, so he’s busy all day with various tasks. Lippy, however, does everything she can to try and distract him from his day’s work! She follows him around, rubbing up against him and jumping on him whenever he stops for a minute.

While Lippy enjoys any type of snuggle or cuddle, her signature move is trying to get on Harry’s back, where she climbs up and gently wraps herself around his neck. She’s super curious, too, and watches over everything that her owner gets up to during the day.

Whether he’s making a cup of tea or watering the garden, you can be sure that Lippy is around somewhere, most probably on Harry’s neck!

He told The Dodo:

“It doesn’t matter what I’m doing, she’s just content up there. When it’s food time for her, it’s maybe the only time she gets down.”

Lippy’s attachment to her human is one of the cutest things we’ve ever seen. She doesn’t want to be away from him, even for a second. In the video, you can see just how deep their bond runs, and it’s clear that they’re friends for life.

Harry isn’t annoyed or frustrated by the amount of his attention that Lippy demands. Actually, it’s the exact opposite! He describes her as his ‘best bud’ and no matter what they get up to, they always end the day with cuddles and kisses.

If Harry and Lippy’s relationship has you purring for affection, be sure to share it with your friends! We’d also love to hear from you if you have a super cute relationship with an animal that you’d be willing to share with our viewers!

Keep up with Lippy on TikTok: https://www.tiktok.com/@harryjackson_official 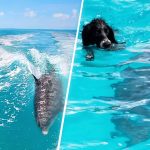 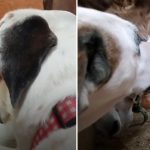