Off the paradise island of Turks and Caicos, local surfers love nothing more than getting in the water and riding the waves. The turquoise blue waters are so inviting and the surfers need very little invitation to jump in and out of the ocean.

More often than not, however, they’re joined by Jojo, the friendliest dolphin in the world. Jojo loves riding the waves in tandem with the surfers, and glides underneath them when they’re surfing alongside the boat.

When he’s particularly excited, Jojo will jump out of the water and cross paths with the surfers, showing just how much he loves to be around them.

Jojo has been visiting boats his whole life, and he is known to almost everyone on the island. The surfers estimate that Jojo is between 35-40 years old now, and you can see his age in the wrinkles that have formed around his eyes.

But watching his personality, you would have no idea that he’s such an old dolphin! When the surfers have their dog Zyzz on board, Jojo gets even more excited and absolutely adores chasing the pup through the waves.

Jojo sometimes even brings his family along to interact with the surfers and their pets, and his kids are just as happy and playful as he is! But Jojo couldn’t possibly imagine the impact that he’s having on the local community.

When plans were announced to launch a dolphinarium on the island, the surfers actively campaigned and used Jojo as an example as to why dolphins should remain in the wild.

To keep up with Jojo’s wild adventures and to find out the importance of ethical interactions with wild animals, you can follow him on Instagram. 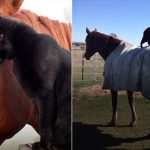 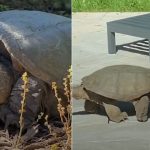