Bronson is a pittie who takes affection and the saying ‘a man’s best friend,’ to another dimension. He has so much love to give that he wants to constantly be at his humans’ side, from the moment they get out of bed in the morning until the time they go to sleep at night.

As one of the quirkiest pitties we’ve ever come across, Bronson is a super happy chappy who just loves every minute of his life. As soon as he wakes up in the morning he immediately turns his attention to his humans, who have to wake up at the very same time!

Whether his dad is washing up in the morning, doing his stretches, or even driving in the car, Bronson is likely to be right next to him, copying everything he does.

But one of Bronson’s coolest traits is definitely the way he charges down the stairs every morning! He runs with such energy and innocence, and it’s just adorable to see how happy he is to be up and enjoying the day.

The reason that Bronson is so happy is because he’s just so thrilled to have finally found his forever home and the love of a family.

He was rescued from an owner who didn’t care for him, and his humans were only too happy to welcome him into their home. They realized right away that Bronson was different to other dogs, but they couldn’t quite believe how genuinely happy he was, all of the time.

Bronson loves absolutely everyone he meets, and he really goes to show how tragically misunderstood pitties actually are. When given the chance to live happily in a stable forever home, you will find that almost all pitties are just the friendliest, most affectionate dogs you could ever care to live with.

You can keep up with Bronson, the world’s happiest pittie, by following him on Instagram. 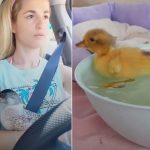 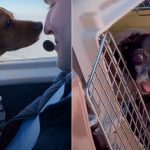