Although Chico might look like an intimidating wolf dog, his character is the total opposite! He’s a big friendly giant, and loves nothing more than playing fetch and snuggling into his owner.

But he also likes to explore.

One night, while Edward was sleeping, Chico decided to go on an adventure. He managed to escape through a fence in the garden, and wandered downtown.

For whatever reason, Chico strolled into Odessa Police Station, one mile away from his home. After jumping up and greeting the employees on shift, Chico stayed for a few minutes.

Curious staff took a photo of Chico and posted it to their social media page, to see if any of the local residents were missing a dog.

In the morning, Edward woke up to calls from his nephew, who told him to check the Odessa PD Facebook page. To Edwards, shock, he saw pictures of his buddy Chico that had been taken during the night.

But he was also confused, because Chico was right where Edward had left him the night before! It seems that as soon as Chico had greeted the officers on shift at the station, he turned around and headed home.

Was Chico reporting himself missing? Or trying to apply for the canine squad? Whatever his reason for dropping into Odessa PD, the staff were delighted to see him again when Edward took him back a few days later.

Edward has now fixed up his fence to make sure that Chico can’t escape during the night again! As his best buddy, he wants to keep him safe.

And while Chico has proved that he will always find his way back home, it’s not a risk that Edward wants to take. What an awesome story, thanks for sharing it guys!

Check out Chico video below: 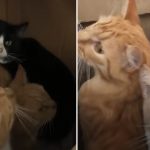 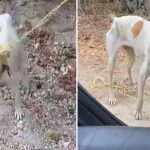