When Sean and Ross set off on their early morning hike in the Taiwanese mountains. They were on a rescue mission.

It was brought to Sean’s attention that there was a dog in a remote mountain village that desperately needed some care. As the founder of Animal Care Trust, Sean immediately jumped into action and arranged with Ross to head out on a daring rescue.

So many people told them it couldn’t be done and that it was too far, but the pair set off, undeterred and sought to bring the dog back with them.

After walking for four hours, they reached the guest house where they thought the dog would be. But they couldn’t see him. One of their worries as they were walking was that they wouldn’t find him upon arrival.

But after looking around for a while, Ross and Sean located the dog under some chairs. It was the first step of his rescue.

Sean was completely taken aback by how friendly the dog was. He immediately crawled out from his space and allowed the men to rescue him. They bandaged up one of his wounds and put him in a backpack they’d brought with them especially. Their long journey back had just begun.

The dog that Sean would name Sandy was remarkably calm the whole way back down the mountain. After nursing him back to health, Sean’s priority was finding Sandy a loving home.

He was in luck.

Sean received a message from a Taiwanese restaurant owner named Bob, who invited Sean for a meal on the house due to his rescue of Sandy. He also asked him to bring Sandy along.

After agreeing to foster Sandy for a few days, Bob fell in love with the dog and agreed to adopt him. It is the happiest possible ending to this daring story of rescue in the Taiwanese mountains!

For more information about Sean’s shelter and to contribute to his work, you can visit his website here. 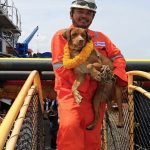 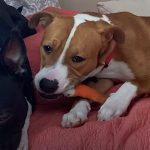