King arrived at the local shelter after his owner passed away. It turns out that his owner had Alzheimer’s disease, and just continually provided King with food.

The result was that King grew to be an incredible 36 pounds, and he was far too heavy to live a healthy life.

When he was brought into the shelter, few rescuers considered taking King home with them, as he would prove to be just too much work.

But when Robin saw a picture of King online, she knew that she was the perfect person to take good care of the chunky cat, and she immediately sprang into action.

She drove straight to the shelter and registered her interest in King, and it wasn’t long until she was able to adopt him and take him home.

Robin had set up a room for King so he could get accustomed to life in his new home for a few days, before meeting Rufus, Robin’s dog.

She was understandably nervous about the introduction, as King is around three times the size of Rufus, but the two were very happy to meet one another!

Robin was motivated to rescue King because she had struggled with weight herself over the years, and realized the importance of helping the cat reduce his size.

After an initial check-up at the vet, King was placed on a reduced food plan and Robin bought as many toys as possible to ensure the cat could exercise at home.

It’s clear that King has found the perfect human companion in Robin, and the two were very much made for each other! Although it’s slow progress, King is making progress with his weight loss and is just loving life in his new home. 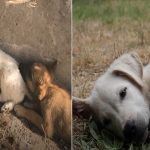 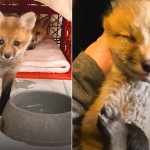