Emus are known to have a bit of a temperamental side to their personalities. And Karen is no exception.

Amanda has spent a while trying to get Karen’s temper under control, but she wasn’t having much success, particularly in the early days! Every time Amanda would get close to Karen, the emu would hiss and motion aggressively towards her.

Undeterred, Amanda kept trying to interact with the emu, but she would continually be met with her bad temper.

Karen came to the rescue center because she wasn’t suited to living in the zoo. She proved difficult for her human handlers to deal with, which is why Amanda took her into the sanctuary.

But Karen isn’t the only emu in Amanda’s care. The center is also home to an emu named Stanley, who couldn’t be any more difficult in personality from Karen if he tried.

Yet it’s often said that opposites attract, and there’s little doubt that Stanley had a positive effect on Karen’s character. Amanda wanted to show Karen that humans were capable of love and affection, too, so she used her relationship with Stanley to show Karen what she was missing.

And over time, her ploy worked. Karen would observe Stanley and Amanda’s relationship and started to realize that humans are not all bad.

Slowly but surely, Karen started to soften around Amanda and she started showing a mischievous side of her own. She would even let Amanda pet her, which is something that was unthinkable at the beginning of their relationship.

And even though Karen still has her moody days, she now loves a cuddle just as much as Stanley! She’s mellowed a lot since arriving and is now comfortable with her new environment, and has grown to realize that she can trust humans.

Karen now lives happily alongside Stanley and her humans, and is living the life that she deserves. To keep up with Amanda’s animal rescue, you can follow her on Instagram at Useless Farm. 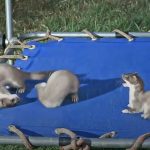 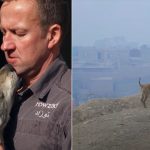