When Frank looked out into his New Jersey yard one day, he was totally taken aback by what he saw! Wandering into sight from the bushes was a giant snapping turtle, and Frank and his kids had no idea where it came from!

Watching the turtle from the window, Frank’s kids affectionately called her ‘Snippy’ and enjoyed watching her take refuge in their garden for the afternoon.

She eventually left the garden and went on her way, and Frank and the kids weren’t sure if she would return. That night, they experienced an extremely heavy downpour, so Frank went out into the garden to assess the damage and debris that was left behind.

That’s when he noticed what looked like ping pong balls littered on his path.

It suddenly dawned on Frank that they must be turtle eggs that Snippy had laid the day before! The rain had disturbed the eggs, so Frank and his kids set about protecting them as quickly as they could.

He went online and bought some sand and a ceramic heat lamp, and created a makeshift nest for the eggs that had been left behind. Because the storm had washed away the initial nest, Frank wasn’t sure that any eggs would actually hatch.

But 3-4 weeks later, his daughter noticed a tiny head emerging from one of the shells! They quickly realized that several eggs hatched within days of one another, and they had a little family of snapping turtles!

When a snapping turtle is born, they have a small yolk sack attached to their front, which feeds them for the first couple of days. As soon as they’ve used the yolk sack up, they’re ready to go and live their lives as they choose. This is why the mother finds a spot to lay the eggs and leaves.

Frank called a reptile sanctuary to get some advice on what to do with the turtles, and he was advised to set them free as soon as he could, so their natural instincts could kick in. And that’s exactly what he did.

He and his kids took the baby snapping turtles to a local pond and set them free, ready to begin their own lives out in the world. 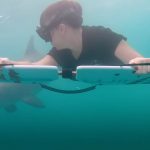 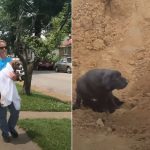