When Fisherman John Dornellas was stationary in the clear Alaskan waters, he was watching magnificent orcas glide through the water.

At one stage, John noticed that one of the orcas appeared to change direction quickly and he moved towards the boat with intent. That’s when John noticed that the orca was actually chasing an otter, who was frantically scrambling to get away from the hunter.

The otter headed directly for the boat as a means to save his life, but John lost sight of him just as the orca disappeared under water.

As it turned out, the otter had jumped onto the back of the boat in the nick of time, as the orca missed him by a breath. It’s an absolutely remarkable piece of amateur footage and shows just how lucky the otter was to survive.

The otter hastily jumped back into the water after his reprieve, but the danger was far from over. After floundering in the ocean for a few more minutes, John was shocked to see him return to the edge of his boat. This time, he wasn’t going anywhere and clambered further into the safety of the boat.

Orcas are incredibly smart and patient hunters. This orca wasn’t giving up easily and continually circled John’s boat. The otter was clearly exhausted from playing cat and mouse with the orca and stretched out on the main section of John’s boat.

After waiting for some time, John had to head out and make his drop, so he set off with the otter on board. After sailing for a few minutes the otter decided that he was safe enough to return to the water, and John watched as he swam off to freedom. 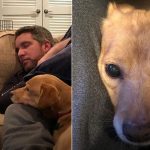 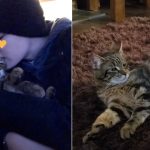