When Vitisak began his day at work, he wasn’t expecting to see anything unusual. After all, the oil rig he works on in the Gulf of Thailand is 135 miles out to see.

However, when he looked down towards one of the pillars on the rig, he noticed something extraordinary: a tiny brown dog.

The dog looked terrified and was clearly tired. Vitisak immediately sought the help of his colleagues and rescued the dog from the ocean.

After nursing the dog back to health for a couple of days, Vitisak arranged for the dog to be transported back to land. This was to get him the treatment that he needed, as he was understandably very tired!

He was picked up by an animal rescue center in Thailand who took care of him and ensured he got his strength back. Vitisak had another ten days to work on the rig before going home, but the first thing he did when he was back on shore was to go and see his canine buddy.

When the dog saw Vitisak, he was thrilled and instantly recognized him. It was at that moment that Vitisak told the rescue organization that he wanted to adopt the dog and take him home.

After making the arrangements, the dog accompanied Vitisak to his family home and his parents and sister fell in love with their new canine companion immediately.

It’s absolutely wonderful that this story had a happy ending, as it’s so sad to think that this dog was so far away from shore. Thanks to the keen eye of Vitisak and the efforts of his colleagues, the dog was given a new chance in life.

What a wonderful story, thanks for sharing it Vitisak! 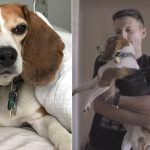 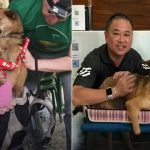