How many times have you dozed off at work or in class after a long hard day? It’s certainly something that many of us can relate to, even if it’s just been for the odd minute until we’ve been woken up by a friend or colleague.

But can you imagine sleeping through an important ceremony that has been put together just for you? That’s what happened to this adorable K-9 comfort dog Brody, who fell asleep during his swearing-in ceremony in Rhode Island.

The 12-week-old puppy woke up extra early for his big swearing-in ceremony and as hard as he tried, he just couldn’t keep his eyes open when the event got underway.

In an interview with The Dodo, Brody’s handler Keith Medeiros tells us more about the dog’s character:

“He plays really hard and he sleeps really hard. When he’s not playing, he’s sleeping, which is kind of tough because he sleeps a lot.”

The excitement of the big day clearly got to Brody, and he’d got himself so excited in the lead up to the big ceremony that he just had to rest his eyes throughout the event. As you can see from the adorable pictures, he got himself comfortable on the desk and just zoned out, leaving the officers to get on with the ceremony.

The Bristol Police Department, where Brody is now a member of the team, were considering a number of options before deciding to recruit Brody. Some staff suggested bringing a bomb-sniffing or narcotics dog onto the team, but Officer Mederios had other ideas.

He suggested that a therapy dog would be a much better idea, and that’s where Brody comes into the story. As you can imagine, his fellow officers loved the idea of a therapy dog, and when Brody arrived, it was as if Christmas came early.

Brody joined the team in March 2020 when the coronavirus pandemic had just started. The officers were initially worried that it would be difficult time to bring a new dog into the team, but Brody soon settled in and began playing a vital role straight away.

“People are really stressed, especially in law enforcement. Just by walking in the police department with Brody, people immediately smile, they immediately get into a better place. They want to pet him, want to hug him and it’s just a really good thing.”

Brody’s new assignment will see him visit schools and nursing homes throughout the local community. He will also be working with officers to help comfort the victims of crime, which is an admirable job given how much people are struggling with everything that’s going on in the world right now.

Although Brody slept through his initiation ceremony, there’s no doubting that he’s extremely switched on when it comes to his work, and officers are already extremely grateful to have him around the place. 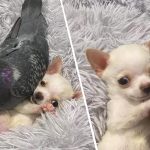 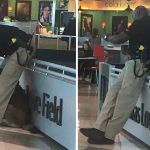