On a stormy Philadelphia night, Jack was woken by his wife who said something strange. She was insistent that a puppy, that didn’t belong to them, had somehow made her way into their home in the middle of the night.

Jack went downstairs and realized that, despite all of the doors and windows being closed, there was in fact an emaciated, injured dog sitting in the middle of their living room.

Totally bemused at how this situation could possibly have unfolded, Jack checked the security footage and was truly amazed at what he saw.

After heading out in the early evening, he obviously hadn’t shut the front door of the house firmly, and the wind must have blown the door open at some stage. At around 3.30 am, the dog limped past and realized the door was open.

While she was hesitant at first, she then made her way up the steps and scrambled inside. Shortly after, an extremely well-meaning passer-by noticed that the front door was wide open. He walked up the steps, checked everything was okay, and closed the door.

After this remarkable chain of events, Jack and his wife called animal control, who said they would take the dog into the system. However, they didn’t like the sound of what might happen to her if they did.

Instead, they took her to the vet to get her a check-up and she had a range of health problems, that they were thankfully able to treat. When they realized that she had no microchip, they decided to keep her and name her Suzy.

It turns out that Suzy was nine years old and had clearly had a rough time of things. After only one week with the family, Suzy was getting on really well with her canine brother George, and they enjoy taking walks and hanging out together.

Jack was also able to identify the guy who closed his door in the middle of the night. It turns out he was a local named Steve, and the pair went out and had a few beers together to celebrate what turned out to be a lifechanging night for Suzy! 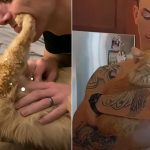 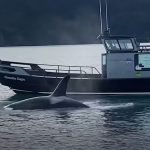