Tongo the Chimp was kidnapped from the Virunga National Park in East Africa by animal traffickers. When news of his ordeal broke, he was thankfully rescued by animal authorities. Because there’s no orphanage in the national park for chimps like Tongo, they have to be flown to a nearby sanctuary to begin their new lives.

Anthony knew that he had to fly Tongo to Lwiro Primates, in the Democratic Republic of Congo, to ensure he would be safe. But flying a baby chimp isn’t easy, as it is an extremely stressful process for them. Instead of putting Tongo in a cage, Anthony decided to let him ride in his lap. Chimps need contact and assurance, so this was the only rational thing that Anthony could think of doing to make the trip comfortable for Tongo.

But the way that Anthony cares for and transports these chimps is nothing short of remarkable. He doesn’t just strap them into his seat, he actually cares for them, feeds them, and gets them off to sleep during the flight. This makes the process of flying a lot less stressful for chimps like Tongo, and ensures that they arrive at their destination safely and in good spirits.

The objective of Anthony and his partners at Virunga National Park and Lwiro Primates is to put an end to animal trafficking. It’s also to help return chimps like Tongo to the wild, which is a long process that takes many years of rehabilitation.

We think that the work these guys are doing is nothing short of inspirational, and deserves to be widely shared and respected. If you want to donate to their incredible efforts, you can do so here. Keep up the amazing work, Anthony and team, we’re right behind you! 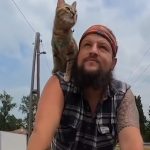 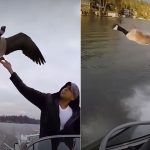