If you’ve ever spent time with a beagle, you will probably be aware that they love chasing scents. Whether it’s rabbits, badgers, or foxes, you will often see beagles go crazy in their pursuit of any type of animal while they’re out on their daily walks.

As such, you might think it’s not in a beagle’s nature to become the best of friends with a bunny rabbit. But you’ve never met Chloe.

For Chloe is a beagle who calls a bunny rabbit her best friend. Rue the rabbit was rescued by Megan, Chloe’s mum, and they’ve developed an inseparable bond with one another.

They sleep together, eat together, and play together. They absolutely love heading into the garden to play in the snow in particular. Although Megan has another bunny and two guinea pigs, it’s only the relationship between Rue and Chloe that has really hit another level.

They’re always on the lookout for one another and are constantly pining for each other’s company. They compete for Megan’s attention, and always want to get the prime spot on her lap in front of the TV every evening!

But it took a little while for Chloe to understand that Rue was different to her. When Megan brought Rue home at first, Chloe was desperate to play with her as she would another dog. But in time she realized that she would have to change her approach to develop their unusual relationship.

One of the cutest things about their relationship, is that Chloe constantly brings Rue toys as a sign of her love for her bunny sibling. She will run from room to room, picking up toys and delivering them to Rue’s side. It’s just the cutest thing ever!

Who would have thought that a beagle and a bunny rabbit could become such good friends? It just goes to show that you should never judge a book by its cover, and be willing to give people [and animals!] a chance, even if they look different to you. 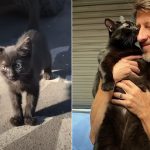 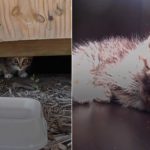