As Daniel was riding his motorcycle through the outback in Australia, he amazed to see so many kangaroos running either side of the road.

A camera on his helmet was capturing footage of his ride, and he noticed something that made him stop and pull over.

One of the kangaroos that was sprinting alongside the motorcycle had actually dropped her baby and didn’t look back to pick him up.

Shocked and not knowing what else to do, Daniel climbed over the fence and picked up the baby kangaroo. The mother didn’t return and the baby was utterly helpless, so Daniel realized that he had to act to save his life.

He put the kangaroo inside his jacket and called his girlfriend for advice. She managed to find someone who was happy to help Daniel and take the kangaroo in, so he programmed the coordinates into his phone and made his way off road, with the kangaroo in his jacket.

Daniel had to drive 80kms from where he was to reach the sanctuary, but he was so glad that he made the effort. As soon as he arrived, he was greeted by the woman who owned the sanctuary, who praised him for handling the baby safely, and assured him that he would be fine in his new home.

And although Daniel was a little sad to have to hand over the baby kangaroo, he knew that it was definitely for the best. And thanks to the care that the baby will receive in his new home, he will eventually be released back into the wild, where he will have the chance to live the life that nature intended.

Thanks to Daniel’s eagle-eyes, he was able to spot the baby falling from his mother’s pouch, and this is yet another animal rescue story with a happy ending. 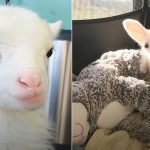 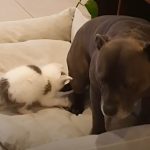