Bernard the adorable St Bernard puppy was stranded and left for dead. He was rescued after a woman noticed him lying on a porch, with no other dogs or people anywhere close by.

Bernard was badly injured, hungry, and extremely weak. It seems that he was saved just in time, as a few more hours on the porch could have been the end for him.

After a trip to the vets, he was taken home to meet his foster family. Bernard just loved drinking milk, and he started to settle into his new surroundings, as many puppies quickly do.

However, it was clear that Bernard’s traumatic experience was weighing on his mind. For comfort, he turned to a huge rainbow teddy bear, which seemed to offer the little pup protection from the cruel world around him.

As you can see from the video, in the early days, Bernard was dwarfed by his teddy bear. He could get lost in its arms, and he would fall asleep safe in the knowledge that he had his bear close by.

His attachment to the bear was probably due to the fact that Bernard had no littermates or mum to snuggle into. He didn’t settle or sleep without knowing his teddy bear was ride by his side.

As his wound began to heal, Bernard grew more confidence. In fact, he turned into an incredibly mischievous puppy, and got up to all kinds of trouble around the house! Given the condition he was found in, it overjoyed his foster mum just to see him grow into an active little puppy.

And things were about to get better for Bernard.

He soon found his forever home, and his new family renamed him Diego. Given his attachment to his rainbow bear, you won’t be surprised to know that it went to his new home with him!

Diego is now more than twice the size of his favorite bear that gave him such comfort while he was a little pup.

We just love stories that have a happy ending like this. Let’s wish Diego all the very best for his new life with his loving family. 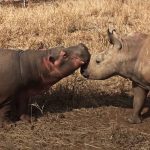 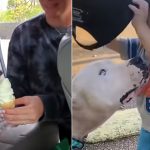