When Caitlin rescued a tiny little Lamb named Flick, he could have easily been mistaken for a cuddly toy! He was tiny and absolutely adorable, and she had no idea just how active he would become in her care.

Flick was rescued because he was being bullied by his siblings due to his tiny size. His mum didn’t have enough milk to give him, and he continued growing weaker with every passing hour.

That’s when Caitlin was asked if she could find a place for Flick at her shelter, and she was only too happy to take him in.

Although Flick was extremely weak on arrival, it wasn’t long before he gained weight and strength and his personality started to shine through!

When Flick was four weeks old, he developed the unusual habit of ramming hard into his human’s legs, for apparently no reason! It was the first sign that Flick had an extremely quirky personality and wanted to live life at a million miles per hour!

Caitlin can’t get over how weird and quirky Flick is, but it’s what makes his human family love him so much! He’s eccentric and has boundless energy, and he has proven to be so much fun to be around.

After a difficult start in life, Caitlin and her family gave Flick the best chance at survival and helped him to come out of his shell.

He was finally ready to live outside with other lambs, and he took his curious and quirky personality with him. Caitlin instantly recognizes Flick when he’s amongst his lamb siblings, as he immediately bounds towards her and shows how happy he is to see her.

And the great news is that Flick is now part of his own flock, and he still absolutely loves his life!

To keep up with Flick and all the other animals at Caitlin’s Rancho Relaxo, you can follow them on Instagram. 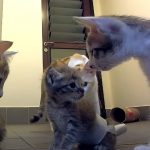 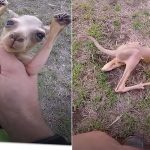