When Ray arrived to work at his junkyard and car repair shop one morning, he noticed a stray cat sitting outside the front door. Being an animal lover, Ray approached the cat, who was extremely friendly and happy to see him.

Ray let him inside as he opened up, and he immediately made himself at home. It was like he had been there forever. After rescuing several cats and taking them home, Ray decided that he didn’t have space for any more cats. And that’s when he had an idea.

He decided to make a home for Buster at his office. And Buster just adores his new workplace! He helps with the printing, checks the computer screens for emails, and introduces himself to new hires and makes sure they can multitask!

But what he really loves doing, is spending time with the customers. In fact, it’s more appropriate to say that he thrusts himself upon customers as they enter the junkyard! He brushes up against them to greet them, and then heads out and checks their ride.

More often than not, Ray finds Buster on [or sometimes even inside!] the customer’s car when it’s being worked on. But as Ray fell in love with Buster, he hated leaving him at the junkyard. So he decided to take him home every weekend.

He now loves to play with Ray’s other cats and charges around the yard. He adores being in the house, but when it’s time to go back to work on Monday morning, Buster’s sitting at the front door ready to go!

Buster is an incredibly important part of the junk yard team, and they wouldn’t know what to do without him. Ray deserves huge credit for the love he’s shown for stray cats – keep up the great work, Ray!

Keep up with Buster and all his adventures on Instagram: https://www.instagram.com/buster_and_brothers/ 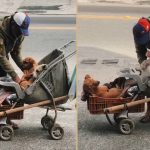 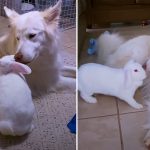