This story is about Tig, a poor pit bull that couldn’t move or walk on his own. He was found by the gutter and brought to an Animal Hospital in the nick of time.

Three days after, he was getting a little bit better and fostered by Kim, one of the most experienced fosters at HRA.

Thanks to Kim’s nursing, his health was getting better day by day. He could stand on his own after two weeks and was able to walk a week later.

He was no longer a sick weakly puppy. He became a really active puppy. He changed both his typical appearance and his emotion. He really kept up with Kim’s older dog.

Then, he was adopted by a kind woman, Megan. He was really happy in his new loving home. He played with Megan’s two other dogs all the time.

It’s amazing to see his transformation. And his ability to love is the most admirable thing about him because he was treated so poorly. But all he wants is to give love and that is the best part about him. 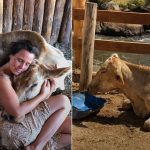 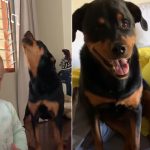