Ten years ago, Patrícia and her husband moved from the city to the countryside. They tried to rescue as many animals as they could because they believed that was a good way that they could do to help them.

Although they didn’t have any help, they never felt alone. They couldn’t stop themself from giving these animals a second chance to life.

One of them was Gaia, the neglected cow found in very poor health. She had so many scars and a broken tail. She couldn’t stand up or move. She was totally exhausted.
Transporting her at that time was a big challenge because they didn’t want to hurt her even more.

They immediately started her treatment. As a result, she was able to stand up on her own and could make her first steps a few months later. In those moments, their bond was growing stronger, and their friendship was born.

After nursing back to health, Gaia could live the life that was hers from the very start. And her greatest achievement was that she remained kind open, pure and forgave humans.

Gaia has taught us a big lesson “There is hope even when we can’t see any.”

To keep up with Gaia and all the other rescues at Santuário Vale da Rainha, check them out on Instagram. 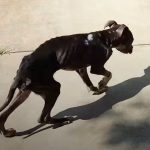